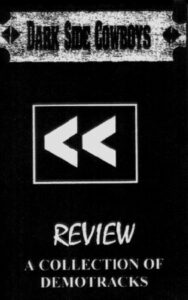 Review is the title of a compilation, a sort of “best of” demotapes. It was released on the independent UK label M&E and also in a swedish limited promotion edition.

On this cassette you’ll find excerpts from DSC’s demotapes. We have chosen to include some of the tracks that have not been released on CD among with old versions of songs that later on have appeared re-recorded on CD. One could look at this as a sort of “best of” – early material – tape and that is what it is ment to be.