DARK SIDE COWBOYS
HISTORY (1993-2020)
A saying about DSC goes “DSC is a society of artists or fools, the listener’s choice” and it is a pretty good place to start if you want to understand what DSC is all about. The band formed back in 1993 and has been going strong ever since. They released six studio albums between 1995 and 2003 and quickly became known as one of Swedens foremost underground/alternative acts of their time. Between 2003 and 2012 the Cowboys kept silent towards the world, except for a one off gig in 2006. In 2012 they revealed news to the world… 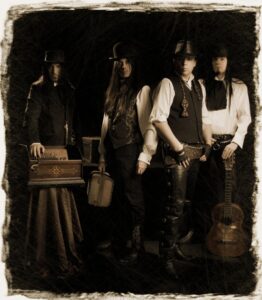 THE MUSIC
Dark Side Cowboys is a very unique band due to many reasons. The music itself is hard to categorize and DSC also use various other medias in order to create the right concepts together with their musical works. Many DSC-releases are made up like soundtracks to films. Hardcore fans might even find scripts or excerpts to the stories behind, all written by DSC.

Musically DSC are hard to label since they blend many genres and continuosly reinvent their sound. The northern landscapes, the midnight sun and the long winter nights are probably keys to what makes the DSC sound so unique.

The critics find it hard to file DSC under a certain category, it’s like DSC have created their very own genre, altough one could also claim that their music belongs in the “alternative” category – related to for example gothic, darkwave and industrial sounds.

THE DISCLOSURE STORY
DSC have also been known for a special way of making records. Starting with the first release DSC buildt a filmistic concept that has sort of become a trademark for the band. Those who’ve got all the DSC-releases can follow a thrilling movie-like story that still has not ended… The first 5 demotapes were all part of the Ars Moriensis story, and it’s full contents have been kept secret from the listeners so far. 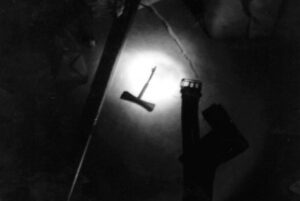 All DSC -CDs from Pure Hearts EP (1995) to High (1999) are connected as part of the Disclosure-story, an epic tale that starts off hundreds of years ago and continues into the future of the 21st century. The Disclosure-story covers the destinies of the people from a world metropolis city, their struggle in search for themselves to disclose the mysteries around them. It’s connection to the Ars Moriensis-story is yet unknown.

In time the whole story might be revealed, but the date is not set if and when DSC will release the total script to Disclosure, if ever. The album Believe (2001) has no connection to the Disclosure story, but rumors has it that DSC have been working on Disclosure Episode III. Excerpts from the novel has been known to be found on the www.

THE EARLY RELEASES
What has happened with DSC during the years then? It all started with the release of Ars Moriensis, divided into five full-length cassettes released on Moriensis Productions, a producers society and underground label. These five cassettes were made as film music, each one of them following a different concept, all released during a period of one year (1993-94). The first part Ars Moriensis gave the band “a name” in the Swedish underground scene and was praised by the critics.

With the third part ,The Hall Of Pain, DSC started to reach outside of Sweden and fanzines in Europe, USA, Australia, even Japan showed a lot of interest. So even the Swedish record label M&A Musicart, who offered DSC a place on their Angel Child compilation (along with The Mission, Merry Thoughts and many more). Soon M&A offered DSC a record deal and they accepted. 1995 still started off with the release of DSCs sixth cassette: Pearls For The Swine , this time available only to subscribers of Wanted Magazine.

THE FIRST CD’S
In November -95 M&A released Pure Hearts EP, the debut cd-maxi from DSC, including the underground hitsongs “Bloodred Moon” and “UnfortuNataly”. All songs were exclusively recorded (not taken from the forthcoming album). This CD has a theme of “love and friendship” but does not follow the filmistic formula on the earlier cassettes, although it has it’s place in the Disclosure-story. This release made DSC even reache no 4 on the alternative top 20 in South Africa with the song “Bloodred Moon”. 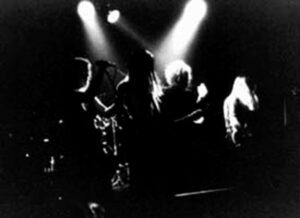 February 26 1996 was the releasedate of The Apocryphal – album on M&A Musicart. This album is made like the soundtrack to a movie, just like the other ones and deals with “abuse of messages” (especially religions, faith & friendship). The Apocryphal is also part of the Disclosure story, but still no further details have been revealed. A massive releaseparty was organized by Moriensis Productions and held in the city of Umeå (Sweden) 1st March, followed by a minitour in Sweden to promote the album. Songs like “Happy” and “Tears For You” soon became pupular songs for the DSC-fans!

NEW RECORD DEAL
1997, and DSC had now left M&A Musicart and continued on their own label Moriensis. Soon it was time for DSC to go touring again… Such A Bitter Tour hit Sweden & Denmark during the year and DSC played along with various bands and even made a minitour together with Swedish EBM-act Project-X and finnish EBM-band Chaingun Operate. 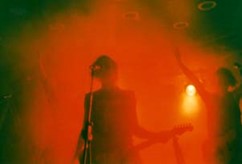 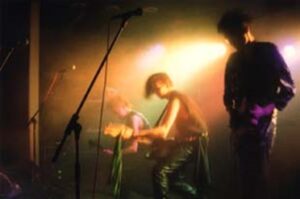 The album Disclosure was then released on Moriensis Productions in May 1997. This album covers the first part of the Disclosure”-story – like part 1 of a soundtrack (although the “first” part of Disclosure is really somewhat the middle part). From this album songs like “Autumn Song”, “Disclosure” and “Stars” have since become live-highlights while the acoustic “Paralyzed” came to be the “hit” on the album.

After the release of the first part in the Disclosure-story the Cowboys took some time off, rebuilding and gaining strength. Meanwhile they worked on the follow-up story and in late summer 97 DSC started the recordings of Disclosure – Episode II. But of course they didn’t forget their fans and in October the ultralimited edition CD Reflections was released. Rumor has it that this CD could still be available somewhere if you look hard enough… A collector’s item for sure.

It was at this point when DSC closed a new record deal with Swedish label Nangijala Records.

COMPILATIONS
DSC have also contributed to many compilations. Among others one can mention “Subsoil II” (from Nangijala Records- includes artists like The Nefilim, Covenant and more), “The Hex Files vol 2” from Euromedia/NovaTekk, “Monument” (a Swedish synth comp.CD where you can find a very popular remix of UnfortuNataly from Pure Hearts EP), The Norwegian compilation “The Revenge Of The Orange” (a progressive/symphonic rock comp) and New Alternatives III goth-sampler from Nightbreed & M&A. The variety of different compilations again shows that the music of DSC might be hard to put a finger on.

SINGLE OF THE YEAR
In 1998 DSC started off with releasing the MCD entitled UnfortuNatalie, containing tracks from their forthcoming third album, among with exclusive songs. It was released on Nangijala Records, where DSC were signed until the Revival album (they still cooperate with the label). Included on this album is a re-recording of the classic “Bloodred Moon” and also a tasters of what would come in the future. The single was voted Single Of The Year -98 in Zynthec Music magazine! 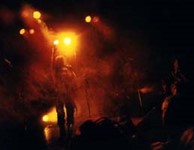 During summer -98 DSC once again went off on a tour to promote the new CDs. This time they hit Arvikafestivalen (alongside bands like Sisters Of Mercy, DAF, Moby and more) and a lot of other venues across Sweden. After a short break DSC returned in the autumn to play at Gothic Helloween Festival in Copenhagen.

In December 1998 Dark Side Cowboys released the second single from their forthcoming album, a CDin full length format, entitled Most. It was the length of a full length album filled to the limit (19 tracks) with new DSC-sounds.

Then the DSC did some gigs during winter time awaiting the big release of their new album High – Disclosure Episode II. A video to the brutal track Most was also recorded in Umeå, directed by John Soliman.

HIGH – DISCLOSURE EPISODE II
High was released in Sweden autum 1999 on Nangijala Records. This album is the sequel to the Disclosure album and musically the songs dig deeper into the Disclosure story, offering moody soundscapes mixed with heavy guitars. On the album are also more atmospheric and symphonic songs like “The Ritual”, where guest artists perform the parts of the characters from the Disclosure-story. High was re-released in Scandinavia in April 2000. The album was also voted no 12 on Best album of 99 at SAMA (Swedish Alternative Music Awards). 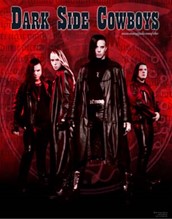 In spring 2000 the Cowboys did one more minitour in Sweden and Norway but most of the time DSC spent at Dimrakk-studios recording their next album, Believe. The first single from this album entitled New Religion was released late 2000 and got praise from the critics. It also went up to no1 position on the Finnish Gothic/Industrial Chart. In April DSC released Believe and started the Believe-Tour 2001, which is one of the most massive tours across Finland and Sweden any alternative Swedish band had done so far.

REVIVAL
2003 saw the release of the Revival album from DSC. It was made as sequel to the successful Believe-album and took the new DSC sound even further. From the melodic “Song of Selena” (with guest guitarrist Mia Coldheart from Crucified Barbara) to heavy metal sounding “No More” to the catchy hit “Circles” the DSC once again renewed their genre. 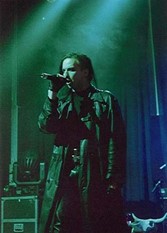 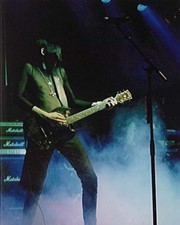 The same year (2003) DSC made a special 10-year anniversary concert, a one-time only performance for sure, featuring guest starring previous members like Atreyo who performed old DSC songs in a way they have not been done for many years.. Then the Cowboys disappeared on the plains except for an appearance live in 2006.

REAPPEARANCE 2012
In 2012 DSC reappeared on the live stages, starting out at the Nostalgia-festival in Malmö.
Fans could see that both VigilAnte and Atreyo had returned to the lineup. Then followed gigs in Finland and northern Sweden where Dark Side Cowboys appeared in their hometown of Strömsund.

In 2013 the band celebrated 20 years and did so by releasing a new studio album with remakes of old songs, rereleasing some back-catalogue and of course playing live (for example alongside Fields of the Nephilim). The Cowboys also did a series of selected gigs during 2014, for example with the Oratorie Choir and an acoustic minitour through northern Sweden. 2014 also saw the release of 2 more albums in the “Chronicles” series and a single called “Circles”, on popular demand.

In 2015 the riders went on a raid across Scandinavia hitting 17 cities and villages in Sweden, Finland and Denmark. There was also the release of the “Origins” album, containing recordings of the acoustic versions of the songs performed at the previous tours. Also rumours spread that new music was finally coming from the dark side of the prairie… 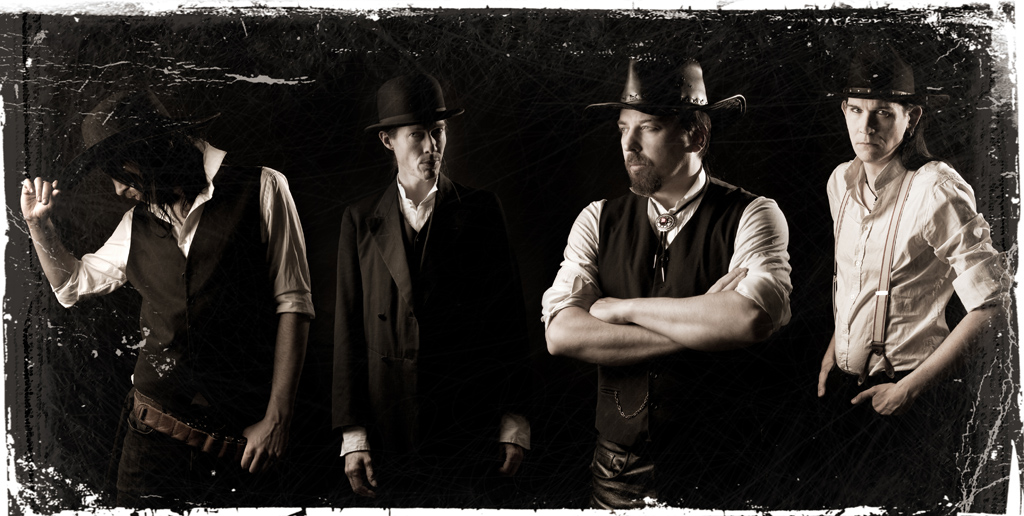 The announcement that there would come a new album with brand new songs came 2016. It was followed by the release of 3 singles and features on numerous compliations and to that several music videos during 2016-2017.

DSC also appeared at the RTSI “Make A Noise”-concert for The Sophie Lancaster Foundation and later they also released the song “Dream With Me“, dedicated to the foundation.DSC also did a few selected gigs this year and performed the new material live, for example at the Two Witches 30-year celebration.

The new album, “Return“, was released in 2018. The album was followed by a the first official live album from DSC, “Reborn”. In the year of the pandemic, 2020, the band released a 74 min conceptual album titled “Solstice”.

This is a way to cut a longer story short. By reading this summary you’ll just get to know a little about what Dark Side Cowboys is all about. This story has already been continued…