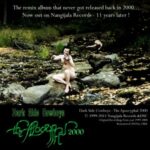 This is actually not a new release from the DSC, but a rather old one, recorded in 1999-2000 as a remix-album of the classic The Apocryphal album. It was released digitally for free via Echolize by Nangijala Records some 10 years later in early 2011. It also contains the previously unreleased track “Dust II” and a new version of “Pride”.