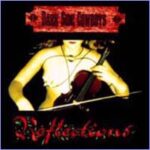 Reflections is the limited edition release of 1997 from the Cowboys (there has been one limited edition release each year between 1994-1997). It holds a number of exclusive tracks, such as the confusing “Fun Car”, the raging “Torture” and the instrumental “Winter part I”. It also has several hard to find tracks like “Once Again”, and a liverecording of “Bloodred Moon”, taken from the Such A Bitter Tour -97. This baby was only released in a very limited edition so you should be lucky if you got one…