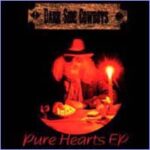 The first official CD is the Pure Hearts EP. It was designed towards the always interesting topics love and friendship and carries some of the most popular songs throughout DSC’s history. It starts off with “Bloodred Moon”, a song that nowadays has become named a swedish “goth-classic”. But the song has also gained ground on the international scene, released on several compilations and also hitting top 5 on the South African alternative radio chart. Flooding on through “Red Day”, another of the Cowboys’ hits can be found in “UnfortuNataly”. This song came to be re-recorded and once again released in 1998, then in form of a single taken from the album High (1999).