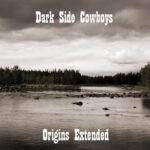 Origins is a limited edition album that was originally released on CD during the “Inlandsbanefestivalen” tour, containing 5 songs performed in acoustic versions. The re-release “Origins Extended” was released online only.

The live recordings feature two special guests, namely swedish singer/songwriter Linn Ulwebäck who sings along on “One Moment In Time” and german guitar virtuoise Martin C Herberg who joined DSC live on “Story of Stories”. The last track is a cover of Wilhelm Peterson-Bergers “Jämtlandssången”, the “national anthem” of Jamtland.

The cover artwork is made out of pictures from the beautiful Ammerån river in Jämtland, Sweden.