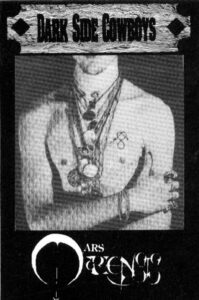 Ars Moriensis, the first release from Dark Side Cowboys, and the first part of the five tales based on the Ars Moriensis story. The cassette MORMC001 were made in 100 numbered copies and it sold out within a few months, yet another issue of 100 copies were made, mainly for promotional use. Future hits like Bloodred Moon and Black Sun can be found here in early demoversions. It’s like those baby-pictures you look at when you’ve grown up and think: “Oh, those were the days…”.