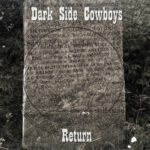 Return is the first studio album with new songs from Dark Side Cowboys since 2003. It contains 12 new songs, among them the three singles released from the album: “One Moment In Time”, “Silent War” and “Dust III” and also the song “Dream With Me” as dedicated to The Sophie Lancaster Foundation and RTSI.

On this album DSC return to their homelands, to their origins and to their old soundscape, as well as take a wild step onto new territories, challenging the listerns and fans. Symbolic, direct, atmospheric and moody at times and uptempo and catchy songs fill the more than one hour long album.

The album is relesed on most major online platforms and also available in limited edition CD digipak with a 16-page booklet with all the lyrics, also featuring a lot fo beautiful artwork and photos from the county of Jamtland, where the Cowboys dwell…