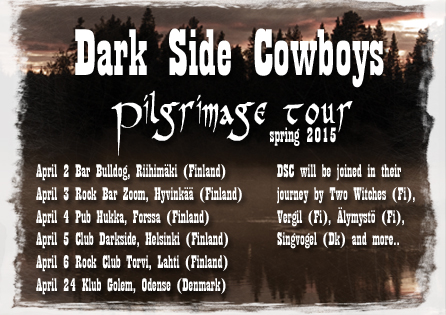 PILGRIMAGE TOUR – SPRING 2015
Dark Side Cowboys will join with Vergil and Two Witches (Official) throughout Finland during Easter. After that the Cowboys will hit Denmark.

Dark Side Cowboys have released 3 studioalbums entitled “Chronicles”, part I – III, all albums containing rearranged and rerecorded songs from their first 20 years. This tour will feature some of the highlights from the albums.

More than a decade ago, DSC travelled across Finland alongside the people in Vergil and Two Witches in Easter. Now they return for a journey to the sacred places…. Pilgrimage.