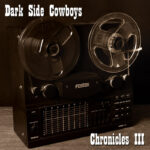 Chronicles III is the third part in the Chronicles-series. It contains 8 more songs from the DSC-history that has been rearranged and rerecorded. The release spans from the monotone “Story of Stories” and the melodic “Circles” to uptempo hits like “Believe” and “Song of Selena”. Some of the tracks on this album had never before been released officialy more than as demos, but now finally reached a wider audience.